7 tips to relieve your baby’s torticollis quickly and effectively

Raising children is no joke, it requires constant and never-ending efforts and energy.

Especially when we have to balance between the best things on the market and your bank account. I help mamas to avoid some headache when choosing stuff to buy for your kids.

I also participate in some affiliate programs (like Amazon) and I will earn commission over your qualified purchases with no extra cost for you.

To support my work, please use the below link if you want to buy anything from Amazon.

Follow this link and look for your item on the search box. 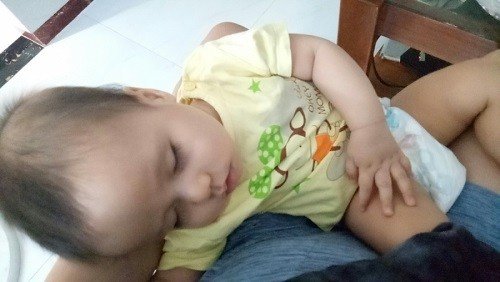 A few weeks before giving birth to Ethan, I got PUPPP rash. To those who don’t know what PUPPP rash is, well, good for you. You don’t have to worry about it.

But if you are just curious, heck, I will you what PUPPP rash is. It’s like a kind of allergy that develop on your body (almost everywhere except your face), and it makes you want to scratch your body until you bleed and you still want to keep scratching after you already bled.

No punch intended, but that shit drove me insane. I couldn’t sleep, I couldn’t stop scratching. I hated everything, everyone and even wanted to give birth as soon as possible to end the misery. I didn’t care about my stretch marks or how I looked. I stopped putting stretch mark cream because it irritated my skin and made me itchy. I was relieved after I gave birth to Ethan, I thought all of that shit was finished, and no more itchiness, no more scratching. And I could finally sleep in peace.

Well, I was mistaken big time.

My boy was born, perfect and precious. I noticed he liked to sleep with his face turned to one side only. And he didn’t turn his head to the opposite site at all. But I didn’t think much about it. Nobody did.

Then a few days later, the doctors suggested me to take him to the physical therapy department. I was like, “why in the hell do I want to take my son there?”. And they were all cool and collected like “we see this shit all the time”. And they said it was just to test.

My husband said “nah, we don’t need it”. And I almost bought it. But then being a coward as I always am, I still took my son to that department later.

The therapist, after grabbing my son, touching and stretching all over his body, with the “this is all cool” face, announced that my son had infant torticollis, aka, titled head, and bowed feet.

I felt like someone slapped me in my face. Hard and loud. My brain went “boom boom boom” inside my head. I could swear people could see my vein popping out on my skull.

For a second, I wanted to slap the therapist, for delivering such a bad news with such a “this shit happens all the time around here” face. But I didn’t. Obviously. And I asked her how to fix the torticollis with a shaky voice.

That started our journey of some long exercise days. And more stress. And more headache.

I went to another physical therapy department just to double check and learn about the exercises. I followed everything they told me to do, all the techniques they taught. And for the first 3 months, nothing worked.

It sucked. Big time. I felt like I was solely responsible for my son’s titled head. And if he grows up with it, I am the one to blame on.

Every time we took him to the hospital to have it check, and then the doctors said no big improvement, it sucked big time. A big f’cked up mess.

I didn’t know what I was doing wrong. But I knew what the doctors and therapists told me might not be 100% correct, and I had to adjust to whatever is best for my baby. So that’s exactly what I did.

Maybe we were lucky, I was lucky. But after only 1.5 months, when Ethan was around 4 months old, I had to get back to work and stopped the therapy (or exercise, as I called it) but he was fine. No more torticollis.

Here’s the list of 7 tips to relieve your baby’s torticollis effectively and quickly. 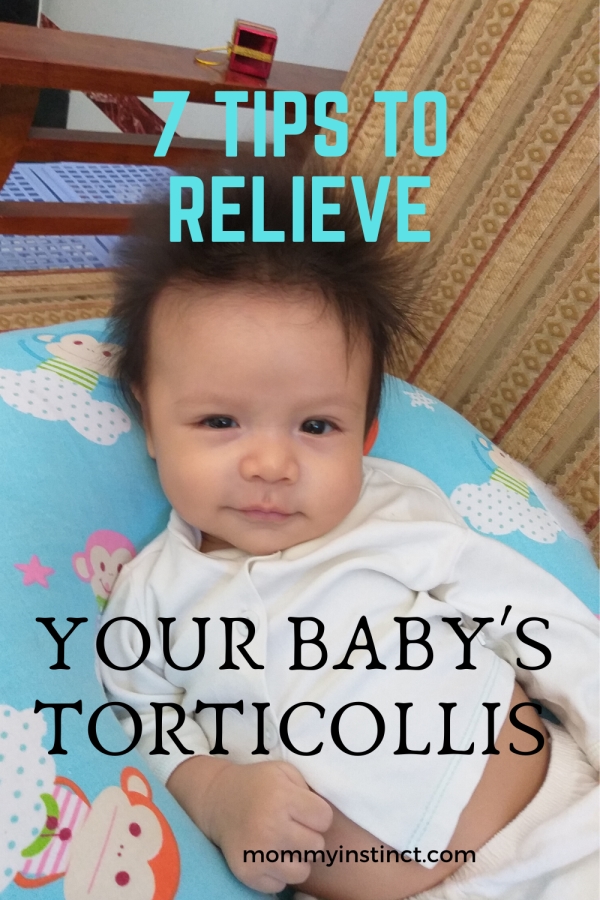 Do the exercises only when he is sleeping

Of course except tummy time exercise, or other activities where you encourage him to turn to his unfavorable side.

But the head turning, neck stretching or muscle massaging exercises should only be carried out when your baby is sleeping.

Because your baby will resist on those exercises. Big time. So instead of forcing him into those exercises, causing muscle tension, fear and lots of screaming and crying, you should wait until he falls asleep. That’s when he completely relaxes his muscles, and the exercises become more effective.

Don’t worry about over-exercising, do the exercises as much as possible

Some therapists told me that I should not do too much exercises for Ethan when he was very young as his muscles and joints were very weak. But that didn’t work out for me.

The thing is, if you wait for your baby to fall asleep to do the exercises, you can never over-exercise him. As each session is quite lengthy, and you as a parent need to sleep too. So take advantage of every precious moment to help your baby, you won’t over-exercise him.

Be flexible. Do whatever works for your baby

Apparently therapists’ opinions vary. They have different opinions on a certain things although they are in the business for such a long time.

Same thing with the infant torticollis.

One told me to massage my baby’s neck, the others told me not to. One told me I should do therapy as much as I could, one told me that my son’s muscles needed a break.

I f’cking hate that so damn much.

It’s like, you don’t know crap, and you depend on those people to tell you what to do, but then they confuse the shit out of you, you end up figuring it out all by yourself.

They told me to do repeat the exercises, 2 minutes each exercise, and repeat 6 times a day. With a total of nearly an hour a day, it doesn’t seem so much, does it?

But it didn’t work. That’s the thing. If it had worked, I wouldn’t have cared if they wanted to keep all the secrets to themselves.

So if you are also confused as heck, I would like to give you parents a little bit credit. Know that you know your baby the best, and do whatever you feel is right for your baby. Of course, professional opinions are important and you must adhere to the exercise instruction to get the best result, but also be flexible and be smart to know what to do.

Focus on exercises that force his neck to the unfavorable positions

One of the exercises that the therapists instructed me to do, was head turning. I had to turn Ethan’s head to both sides, made his chin touch his shoulder on both sides.

But really, it is not necessary. At least, not for his favorable sides.

Generally speaking, when an infant developed torticollis, he can easily reach his favorable shoulder with his chin, while having a very hard time with the other side.

You don’t have to worry about his favorable side. Focus your time and energy on the other side.

Set a time target for each exercise each round, and do not skip

When I was exercising Ethan, I set a time target for each exercise. 20 minutes each exercise. Totally 1.5 hour each session. And I repeated 3 times a night.

I kept pushing and pushing. I didn’t skip.

Thankfully, my hard work paid off only after 1.5 month.

If you share your bed with your baby, sleep on his unfavorable side to encourage him to turn his neck to that side to access to your breasts.

Due to my son’s torticollis condition, I decided to share my bed with him. When he woke up during the night asking for milk, I offered my breasts from his unfavorable side. To get access to the milk, he had to try to turn his neck.

I believe this greatly helped with his condition, as this originated from his own muscles and efforts.

Do whatever you can to encourage your baby to move to his unfavorable side.

When your baby is awake, in addition to tummy time, feeding time, do what you can to encourage your baby to move to their affected side. All of these movements can strengthen your baby’s neck.

Make sure you got the right exercises moves, and keep trying as hard and fast as you can.

You can and will help your little baby

Generally speaking, if being discovered and treated early, your baby’s torticollis condition can completely go away after a few months.

You are completely capable of helping your little one. It’s a hard and long fight, but you can do it.

Everything for our little ones.

Mai Pham discovered her passion for writing a few years ago and she never stop thinking about it ever since. She finally took the leap and created Live a Worthy Life to brag about her smart ass (mainly just for fun). Enjoyed the fun writing brings, now with her new interest in everything-baby-related, she created Mommy Instinct, to tell mamas that it's ok that they mess up, that they don't know what the hell they are doing, and that it's okay to sit back and relax for a while. 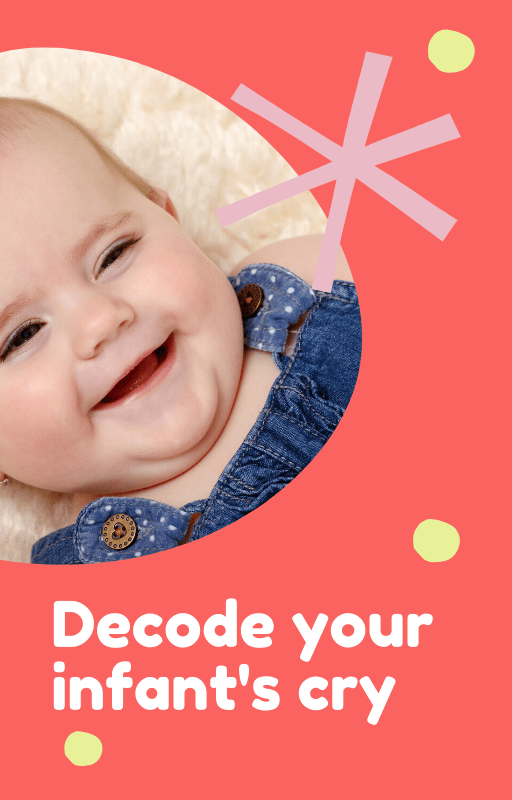 Get this Free Guide

to stop the crying fast!